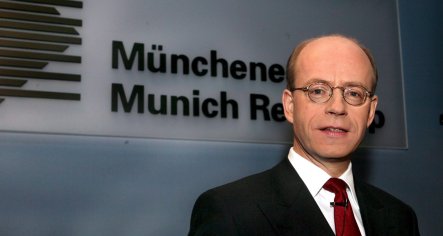 “Other cases are possible,” Nikolaus von Bomhard told reporters late on Tuesday in the northern port of Hamburg. “We have not seen the end of it.”

He said banks had not yet finished accounting for risky assets on their books, ahead of third-quarter earnings reports to be published in the coming weeks.

German banks have been among the high-profile cases that emerged after the crisis was sparked more than a year ago by the collapse of the US market for high-risk, or subprime mortgages. They had invested heavily in complex securities backed by risky loans on which borrowers have defaulted in large numbers.

Banks such as IKB, SachsenLB and Hypo Real Estate have either been thrown rescue lines worth billions of euros or been taken over by other German banks.

The biggest private German banks, Deutsche Bank and Commerzbank, have also written off billions of euros from the value of investments exposed to the financial crisis, but are not currently believed to be at risk. On Wednesday, German lawmakers were debating a proposed €480-billion ($655-billion) bail-out package for the country’s banks.

The plan includes up to €80 billion in fresh capital for banks and €400 billion in guarantees to jumpstart stalled lending on crucial interbank money markets.

Von Bomhard, the head of one of the world’s biggest reinsurance companies, excluded however a bankruptcy on the scale of US investment bank Lehman Brothers a month ago, a Munich Re spokeswoman told AFP on Wednesday.

Several German banks could nonetheless seek aid contained in a proposal being considered by lawmakers in Berlin, von Bomhard said. Munich Re would not however, because “we have reduced our risky credits considerably in the past few years, which is why we are in a good position now,” the insurance boss said.

Seasonal workers, domestic and cleaning staff, the self-employed, the unemployed and those on Italy’s ‘citizens’ income’ will be added to the categories of people in Italy eligible for a one-off €200 payment, ministers reportedly announced on Thursday evening.

The one-time bonus, announced earlier this week as part of a package of financial measures designed to offset the rising cost of living, was initially set to be for pensioners and workers on an income of less than €35,000 only.

However the government has now agreed to extend the payment to the additional groups following pressure from Italy’s labour, families, and regional affairs ministers and representatives of the Five Star Movement, according to news agency Ansa.

Pensioners and employees will reportedly receive the €200 benefit between June and July via a direct payment into their pension slip or pay packet.

For other groups, a special fund will be created at the Labour Ministry and the procedures for claiming and distributing payments detailed in an incoming decree, according to the Corriere della Sera news daily.

One new measure introduced at the cabinet meeting on Thursday is the introduction of a one-time €60 public transport bonus for students and workers earning below €35,000. The bonus is reportedly designed to encourage greater use of public transport and will take the form of an e-voucher that can be used when purchasing a bus, train or metro season pass.

Other provisions reportedly proposed in the energy and investment decree (decreto energia e investimenti), which is still being adjusted and amended, include extending energy bill discounts, cutting petrol excise duty and rolling on the deadline to claim Italy’s popular ‘superbonus 110’.

The €14 billion aid package, intended to lessen the economic impact of the war in Ukraine, will “fight the higher cost of living” and is “a temporary situation”, Prime Minister Mario Draghi has said.

The Local will report further details of the payment scheme once they become available following final approval of the decree.

PARTNER CONTENT
Living abroad: how can you assess your mental health?