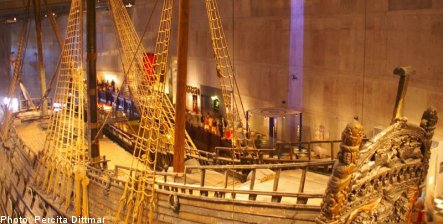 The Vasa sank on its maiden voyage in 1628 and lay at the bottom of Stockholm’s harbour for more than 300 years until being lifted from the sea bottom in the early 1960s.

After decades of restoration, the ship was put on permanent display for the public in the Vasa Museum, which opened in 1990.

Several years ago, researchers feared that sulfur absorbed by the Vasa’s wooden hull during its time on the sea floor was converting into sulfuric acid and damaging the historic relic.

But a new study by Gunnar Almkvist, a chemist at Uppsala University, shows that iron is the more looming threat than sulfur to the ship’s continued preservation.

“Sulfur was noted first and that problem remains to some extent, but we’ve found that the break down that’s been observed is connected to the presence of iron,” Almkvist told the Dagens Nyheter newspaper.

Furthermore, the study reveals that the previously feared sulfur may actually be helping slow the Vasa’s break down as its presence helps reduces the damaging effects of the iron.

Despite the discovery of a new threat to the Vasa, Almkvist stressed that the ship isn’t any immediate danger.

“I don’t want to paint too dark a picture. It’s more likely that we can expect a slow change. It can take decades or centuries before we see any large negative consequences,” he told the newspaper.