Sweden has long had a good reputation as an open and growth-oriented nation. This has contributed to making our country an attractive place both in which to live and conduct business.

But the new surveillance law put forward by the Swedish government is causing a great deal of concern and alarm among many parts of our society, and the government’s handling of reactions to the new law has generated little or no confidence.

Prime Minister Fredrik Reinfeldt is calling for calm and sees no reason for alarm. But unfortunately there are legitimate grounds for concern with regard to the likely effects of the signals intelligence law, not just in relation to the privacy of Swedish citizens.

The business consequences of the law are likely to hinder the entire Swedish IT sector and seriously jeopardize Sweden’s good reputation as a leading nation in the fields of knowledge and IT.

Swedish companies are participating and prospering in an ever more globalised world and are increasingly selling their services on the international market. In order to avoid impairing Swedish competitiveness it is vital that Sweden steers clear of regulations that deviate from the EU norm. In fact, Sweden should work towards achieving a harmonised regulatory environment within the European Union.

The new signals intelligence law is one obvious example of how special Swedish regulations can have directly negative effects on Swedish business as a whole. Reactions and consequences have been instant – both in Sweden and abroad.

Sweden is one of the most prominent internet nations in the world and is an important transit country for much of Norway’s, Finland’s and Russia’s internet traffic. The forthcoming signals intelligence law has provoked reactions from customers in all of these countries.

One example is the market leading Swedish-Finnish telecom company TeliaSonera, which has already responded to the requests of its Finnish customers by moving its Finnish e-mail and web servers from Swedish to Finnish territory.

Another example is the Internet service provider Three (3), which is under pressure to consider solutions that exclude Sweden in order to safeguard the privacy of its Danish customers.

A third example is the successful Swedish mobile e-mail supplier Momail, which is considering relocating abroad as a direct result of the signals intelligence law. This will mean fewer job opportunities and fewer investments in Sweden.

The Swedish legislation will also create large and unnecessary costs for the Swedish telecom industry. The signals intelligence law states that service providers shall bear all the costs, both fixed and variable, for leading their massive data streams to the information intelligence agency’s so-called “concurrence points”.

The government wrote in its legislative proposal that the effects for the telecom industry will be cost neutral, meaning that costs will affect all relevant service providers equally. This is not true.

The telecom industry is – both at a national and international level – an extremely competitive industry with very low margins, and the Swedish government is now forcing Swedish telecom companies to bear costs that their European competitors do not need to take into account. Views proportionally, smaller service providers will be hit more severely by the law.

Taken as a whole, Swedish telecom companies will have a distinct competitive disadvantage in comparison to their foreign competitors.

The aforementioned consequences may seem serious enough to call into question the value of the signals intelligence law. But what most worries the Swedish IT industry is the obvious risk that Sweden’s reputation as a prominent knowledge and IT nation will be seriously devalued. What is at stake is Sweden’s ability to compete on the global market.

Indications are pouring in from all quarters that Sweden may no longer be seen as an attractive market for IT investments.

Foreign IT companies have become hesitant about future investments in the Swedish market; important Swedish industries such as telecommunication and data storage are seeing their attractiveness on the international market diminish, and even Swedish IT companies are considering moves overseas.

Google has indicated a possible retreat, or at least a down-scaling of its presence on the Swedish market.

The Norwegian government is seriously concerned and has tasked the national post and telecommunications agency with investigating the possible impact of the law on Norwegian interests. An equivalent investigation was carried out by Finnish authorities in 2007.

The concerns outlined above have already had very real consequences for Swedish competitiveness. Sweden’s position as one of the leading knowledge and IT nations is under threat regardless of whether or not the Prime Minister believes that the law has been misunderstood.

We are waiting for the government to listen seriously to our concerns. What we would like is an answer to the question we have been asking ourselves: is the signals intelligence law really worth the cost? 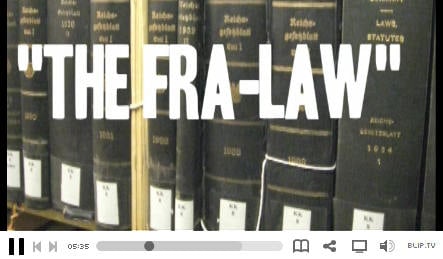 The third chair was for the spy

Swedish firm: ‘New law will drive businesses out of the country’