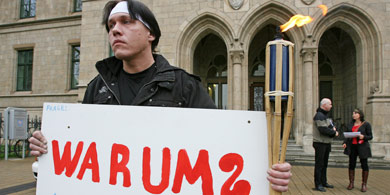 A man outside the court. His sign reads, 'why?' Photo: DPA

The trial against the woman from Thörey began on Monday in Erfurt. She is charged with killing the three babies when she was underage, at 16, 17 and 19 years old.

Prosecutors are seeking a unified sentence for each separate crime, the court said.

The woman’s defense lawyers are pushing for two-year sentence.

Judgement on the case is expected on May 7.

Germany has been plagued with gruesome infanticide cases in the last few years. One woman who killed nine of her babies was sentenced to 15 years in prison in early April.