Time to tango: what’s on in Sweden

Something for the weekend:Learn how to dance the tango in Stockholm, learn about the lives of the Swedish settlers in the US in Gothenburg and satisfy your taste for the baroque in Malmö.

Storms are expected to strike in many parts of Sweden this weekend, with the south of the country likely to be hardest hit.

Join the Club is The Local's guide to becoming a member of sporting organizations in Sweden.

MS patient jailed for cannabis use

A Swedish multiple sclerosis patient is just days away from the start of a one-year jail term after she was convicted on narcotics charges for growing and distributing cannabis.

The proportion of eastern German employees earning less than €7.50 per hour is 20 percent, compared to 12 percent of western Germans, according to the Halle Institute for Economic Research (IWH). The study was based on data collected from thousands of German households. According to the institute, a worker earning €7.50 per hour and working a 40 hour week would bring home roughly €1,300 per month gross salary.

Rich getting richer in Sweden

It pays to build a family in Sweden—and being young with a high income doesn’t hurt either.

The Dax, an index of the top 30 German companies, made a 5 percent gain on Thursday, as good earnings in the real economy, as well as gains in Asian and American markets helped calm the mass panic on the bourses.

Nokia CEO Olli-Pekka Kallasvuo has offered workers in Bochum, Germany a chance to transfer to the new plant in Romania. Nokia’s 44 percent surge in net profit over the last quarter has stirred further anger among those affected by Nokia’s plant closure in Bochum and has intensified criticism.

Government advisors give thumbs up for OMX-Nasdaq deal

The offer from Nasdaq and Borse Dubai for OMX is a positive development for the Nordic stock exchange operator, according to a report by the Financial Markets Advisory Committee.

As of now, only 158 architecture firms have joined the international competition to build the Berlin City Palace, the Prussian royal palace that was damaged by allied bombing and torn down by East German authorities.

Poor language skill could be blamed for much of Germany’s youth crime, a new study suggests. A study led by criminologist Claudius Ohder showed that violent behaviour that could lead to later criminal activity was often identified at the ages of 5 or 6. Measures that followed the diagnosis had minimal effect.

Germans are showing a growing interest in exorcism, priests behind a Polish exorcism centre claim.

Munich is planning a carnival parade on the same day holocaust victims are supposed to be remembered, and critics are blaming Christian Ude, the mayor of Munich and centre-left SPD party member, for the faulty planning. Fasching is a German carnival celebration.

A Gothenburg man opened the door of his apartment Thursday night to what he thought was a flower delivery. 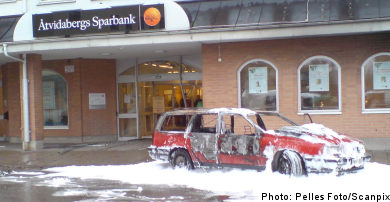 ‘Stand back or we’ll shoot’

A gang armed with automatic weapons broke into a bank in the southeastern town of Åtvidaberg early on Friday morning, firing shots and leaving a burning car at the scene of the crime.

A Wild West-inspired bar brawl at Kvarnen in southern Stockholm left a 24-year old man near death after being stabbed in the neck with a broken bottle.

The owner of Lund's largest camera store has been reported to Sweden's ethnic discrimination ombudsman (DO) for displaying a sign in Polish to warn off would-be thieves.

The Swedish government has approved the sale of six JAS 39 Gripen fighter planes to Thailand.

Sweden's centre-left opposition has opened up a record 20.6 percentage point lead lead over the parties in the ruling Alliance, a new poll has shown.